COLUMBUS, Ohio – Gryphon Auction Group has been appointed as Special Master to complete the foreclosure auction of 2 suburban single family homes in the greater Columbus, Ohio area; one in Grove City and the second in Dublin.

Both properties are offered for Online Auction now through September 22, 2016 at www.gryphonusa.com.   Bidders who prefer to bid live may do so on the final day of the offering by contacting the auctioneer. 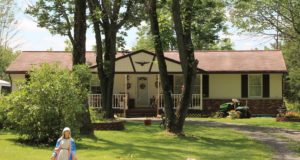 The foreclosure auction of real estate by private auctioneer is not new in Ohio however the process has recently been streamlined under Ohio Sub HB 390 which passed in May and was signed by Governor John Kasich in late June.  Key modifications allow for selling online only as well as defining the role of Private Selling Officers who would be qualified to undertake the auctions across the state.

“This change is long overdue in Ohio.  Privatizing foreclosure auctions will let the Courts and creditors get properties sold more quickly and efficiently than simply running the auction through the local Sheriffs department benefiting both the consumer and the creditor” said Richard Kruse, president of Gryphon USA and a state qualified Private Selling Officer.

Gryphon USA, Ltd. is a multi-faceted asset management and liquidation firm focusing on the operations and dissolution of single assets through and including entire companies. The company maintains a receivership and asset management group, diverse auction practice and real property group.  Traditional real estate transactions are managed in conjunction with Borror Properties Real Estate.

About the Author: Rich Kruse

Richard F. Kruse is Managing Partner of Gryphon USA, Ltd. The company oversees a receivership & asset management group, a commercial auction business and, in conjunction with Borror Properties, a full service real estate advisory practice. Mr. Kruse’s engagements are primarily focused on complex state and federal level legal matters, foreclosure and insolvency. Since 1996, he has acted in the capacity of receiver, interim manager, asset purchaser, liquidating agent, equipment appraiser, broker, property manager and/or auctioneer in transactions throughout the United States, Mexico and Canada – all with combined asset values over $2 billion dollars. In 2003, Mr. Kruse began strategically focusing on regional projects and accepting receivership appointments throughout Ohio, and ever since, has operated and sold or wound-down over 250 corporate entities through negotiated sale and auction. Mr. Kruse routinely teaches seminars on distressed asset management and corporate wind down and is an instructor at The Ohio Auction School. He is frequently consulted as an industry expert by the Columbus Dispatch and Columbus Business First newspapers. In 2011, Mr. Kruse participated in drafting new local rules for receivership management in his home base of Franklin County, Ohio. Most recently, he has been active in promoting and drafting modified legislation language related to streamlining the foreclosure sale process in Ohio. Mr. Kruse is a member of the American Bankruptcy Institute and Turnaround Management Association, where he formerly sat on the board of the Ohio Chapter. He is a member of the National and Ohio Associations of Realtors, and National and Ohio Auctioneers Associations. Mr. Kruse was recognized as “One to Know” in Real Estate 2013 by Business First, and in October of 2013, he was appointed by Governor John Kasich to fill a vacancy on the Ohio Auctioneers Commission. His first full term on the Commission began in late 2014. Mr. Kruse acts as advisor on strategy and finance to political candidates in Central Ohio, and is a graduate of the 2006 Leadership Columbus Program. In his personal life, he is dedicated to causes like education, children and politics. He is an active volunteer, fundraiser and parishioner at CenterPoint Church Gahanna where he participates in many hospitality functions and youth program. When he’s not working, he enjoys traveling and cooking. Mr. Kruse and his wife, Melissa, have one daughter, Savannah, and live in a northern suburb of Columbus, Ohio.