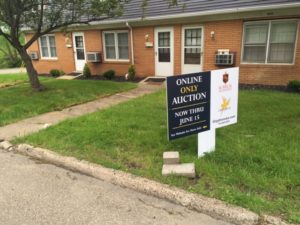 May 18, 2016 (COLUMBUS, Ohio) – Gryphon Auction Group and auctioneer Richard Kruse have been engaged to undertake an Online Only Bankruptcy Auction of 1001 Oakland Ave., Cambridge, Ohio, 43725.  The property is a 6 unit apartment building with 5 x 2BR townhomes and 1 x 1BR apartment.

The location is owned by JC Fodale Energy Services and has been used as housing for local employees.  Fodale filed bankruptcy earlier in the year in the Western District of Louisiana and ceased operations.  Former employees vacated immediately leaving behind hard hats, work apparel and even refrigerators full of food.

The auction will be conducted entirely online at www.gryphonusa.com and will end at 1:30pm on Wednesday, June 15, 2016.  Inspection will be available the week prior on Tuesday, June 7th from 11am to 1pm.  Broker participation is encouraged.

About the Author: Rich Kruse

Richard F. Kruse is Managing Partner of Gryphon USA, Ltd. The company oversees a receivership & asset management group, a commercial auction business and, in conjunction with Borror Properties, a full service real estate advisory practice. Mr. Kruse’s engagements are primarily focused on complex state and federal level legal matters, foreclosure and insolvency. Since 1996, he has acted in the capacity of receiver, interim manager, asset purchaser, liquidating agent, equipment appraiser, broker, property manager and/or auctioneer in transactions throughout the United States, Mexico and Canada – all with combined asset values over $2 billion dollars. In 2003, Mr. Kruse began strategically focusing on regional projects and accepting receivership appointments throughout Ohio, and ever since, has operated and sold or wound-down over 250 corporate entities through negotiated sale and auction. Mr. Kruse routinely teaches seminars on distressed asset management and corporate wind down and is an instructor at The Ohio Auction School. He is frequently consulted as an industry expert by the Columbus Dispatch and Columbus Business First newspapers. In 2011, Mr. Kruse participated in drafting new local rules for receivership management in his home base of Franklin County, Ohio. Most recently, he has been active in promoting and drafting modified legislation language related to streamlining the foreclosure sale process in Ohio. Mr. Kruse is a member of the American Bankruptcy Institute and Turnaround Management Association, where he formerly sat on the board of the Ohio Chapter. He is a member of the National and Ohio Associations of Realtors, and National and Ohio Auctioneers Associations. Mr. Kruse was recognized as “One to Know” in Real Estate 2013 by Business First, and in October of 2013, he was appointed by Governor John Kasich to fill a vacancy on the Ohio Auctioneers Commission. His first full term on the Commission began in late 2014. Mr. Kruse acts as advisor on strategy and finance to political candidates in Central Ohio, and is a graduate of the 2006 Leadership Columbus Program. In his personal life, he is dedicated to causes like education, children and politics. He is an active volunteer, fundraiser and parishioner at CenterPoint Church Gahanna where he participates in many hospitality functions and youth program. When he’s not working, he enjoys traveling and cooking. Mr. Kruse and his wife, Melissa, have one daughter, Savannah, and live in a northern suburb of Columbus, Ohio.